Paige Castellanos of Penn State shared this presentation at the Rural Sociological Society annual meeting in Columbus, Ohio in 2017. The presentation was prepared with co-authors Janelle Larson, Leif Jensen and Elisabeth Garner, also of Penn State. In the slideshow, Castellanos introduces "Empowering women through horticulture in Honduras" — highlighting preliminary findings from this Horticulture Innovation Lab project.

Lessons from the Women in Agriculture Network Honduras Project

This project is led by researchers from The Pennsylvania State University and the Pan-American Agricultural School, Zamorano. Based in Western Honduras, the project seeks to illuminate how the horticulture value chain can support equity and empowerment for women.  Empowerment, in the context of the project, is defined as agency which includes the power over, the power to, power with and power within (Kabeer, 2006; Alkire et al, 2013). The project's work is grounded by a gendered economy perspective.

Its research objectives seek to determine barriers to women’s participation in the horticulture value chain, identify barriers to women’s adoption of technologies and identify policies and cultural norms that limit the participation of women and other marginalized populations in the horticulture value chain. The project also seeks to highlight intra-household dynamics between men and women, particularly in terms of decision making, livelihood strategies and agricultural production.

Researchers involved in the project employed focus groups and key informant interviews to gather qualitative data and a household survey to gather quantitative data. They also hosted workshops to bring producer organizations together to share their experiences and farmer field schools which integrated gender into horticulture production training.

The survey was conducted across 30 municipalities and in 103 communities in Western Honduras. It asked 953 respondents (both male and female heads in each household) from 562 households about household ownership of assets, access to various types of credit, control over income, food insecurity and dietary diversity. The team used the Abbreviated Women's Empowerment in Agriculture Index (A-WEAI) to measure the empowerment, inclusion and agency of women in agriculture.

Descriptions below are based on graphs and tables in the presentation.

Ownership of assets, between men and women

Household control over income from crops and livestock in Honduras

Food insecurity experiences by gender and household type in Honduras

The survey revealed that women in single-headed households experienced more mild, moderate and severe food insecurity than other households, using the 8 key questions from the Food Insecurity Experiences Scale (FIES) survey module. The module's questions ask about experiences in the last 12 months.

Only 8.6 percent reported eating diets full of leafy greens, 11.9% claimed to routinely eat fruits and vegetables rich in vitamin A and 22.2 percent reported that they routinely ate meat and seafood. Findings by food group are also delineated in presentation slides by household type.

Key findings across households on empowerment, security and diets

The presentation summarized key findings from the surveys:

Based on these results, Castellanos presented that researchers hope to expand their data analysis to include multivariate regressions. They hope to further analyze the division of agriculture production between men and women and also to examine links between the socially defined norms and perceptions of horticulture production. They also hope to address barriers not included in the Women's Empowerment in Agriculture Index including domestic and community violence and access to education.

Empowering women through horticulture in Honduras 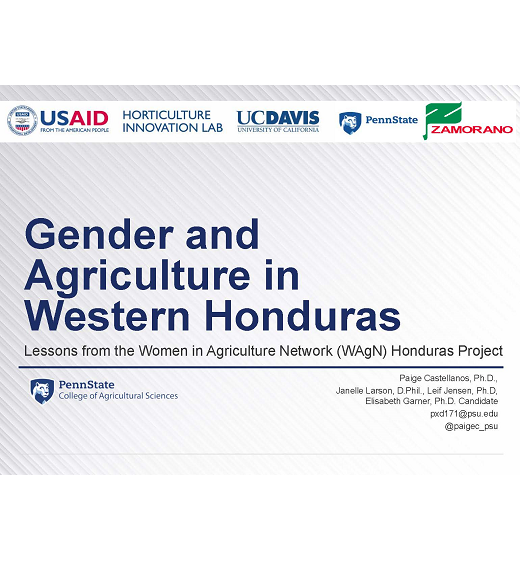