Effect of Genotype, Environment, and Genotype-Environment Interaction on Fe content of Amaranthus spp.

This academic poster shares findings from a comparison of the iron content in five varieties of vegetable amaranth, to examine the effects of genotype, environment, and genotype-environment interaction on this vegetable's nutrient content.

This poster was presented at the 2015 National Association of Plant Breeders Conference in Pullman, Washington, and was authored by David Byrnes, Qingli Wu, Hector Rodolfo Juliani, Fekadu Dinnsa, Steve Weller, and James Simon. It was created as part of the Horticulture Innovation Lab project focused on improving nutrition with African indigenous vegetables in Kenya and Zambia.

Effect of Genotype, Environment, and Genotype-Environment Interaction on Fe content of Amaranthus spp.

Amaranthus spp. is one of several African Indigenous Vegetables valued as a means of delivering essential micronutrients to resource-limited communities. However, the effect of phenotypic plasticity, or genotype environment interaction (GEI) on the ability of this plant to deliver key nutrients is under-studied. The purpose of this study was to make observations on the extent of GEI on the Fe content of Amaranthus spp., ultimately toward making selections for high micronutrient content performance among otherwise advanced genotypes. Five genotypes were analyzed for Fe content from trials in Pittstown, New Jersey (NJ), USA, and Arusha, Tanzania. Analysis of variance (ANOVA) results indicate that genotype effect was highly significant (p<.001), environment effect was significant (p<.05) and the effect of GEI was also highly significant (p<.001).

Iron deficiency anemia is estimated to afflict about 50% of all pregnant women and 40% of preschool-age children in developing countries. Amaranth is among the most popular leafy green vegetables in Sub-Saharan Africa and is a focus of recent efforts by the Horticulture Innovation Lab at UC Davis to link production of high-nutrient horticultural crops to the improvement of health status at the household and community level. Amaranthus spp. has had considerable attention from researchers over recent decades for being an under-developed, under-utilized crop. As one of the few eudicots known to exhibit C4 photosynthesis, Amaranthus spp. is often proposed as a promising crop for low-input cultivation, especially in warmer climates. Selection efforts are on-going by the World Vegetable Center to provide advanced genotypes for smallholder farms and household gardens to improve the availability and consumption of this crop for both income generation and to supplement diets. Demonstration of feasibility in selecting for Fe content or other problem micronutrients would be valuable toward these efforts and for the marketing of this crop in general.

Genotypes were transplanted and field-grown in complete randomized block design at Snyder Research Farm of Rutgers University, Pittstown, NJ in 2013 and the World Vegetable Center of East and Southern Africa in Arusha, Tanzania in 2014. Samples analyzed are exclusively from first-harvest foliar material only. Samples were dried upon harvesting and stored at NUANPP program laboratory, Rutgers University. Fertilizer regimens, soil texture, irrigation methods, and drying methods were non-analogous between locations. Fe content results are adjusted to represent fresh-weight estimates. Analysis Fe content was quantified by Inductively Coupled Plasma (ICP) analysis at the Penn State Agricultural Analytical Services Lab. Elemental analysis was performed by Penn State Agricultural Analytical Services by ICP analysis of samples in replicates of three prepared and ground at NUANPP program laboratory. Statistics ANOVA was performed using R Studio with Agricolae package for main effects of genotype and environment, as well as for GEI on Fe content.

Half of the total observations across all genotypes and environments placed Amaranthus spp. above the “high source” threshold for Fe content of the Codex Alimentarius standards. All Fe content observations in this study were above that of the USDA reference data, being 2.32 mg/100g4. Each of the AVRDC genotypes had superior Fe content when grown in NJ as opposed to the single Amaranthus tricolor genotype, which had the highest value in this study from the Tanzania trial. The most significant variation was determined by the ANOVA to be a result of genotype effect. This may indicate feasibility for selecting genotypes of high performance in Fe content. The environment effect also accounted for significant variation among materials, indicating the need for observations from additional environments toward identifying ideal genotypes for stability as well as to score for discriminating power and representativeness of environments. Given the observation of a highly significant environment-genotype effect and crossover of Fe content performance in the two environments presented here, it is predictable that genotypes can be identified which reliably perform best in particular environments, but not stably across all environments. However, considering the relatively small portion of the Amaranthus spp. germplasm which was studied here and the highly significant variation by genotype effect, further testing may elucidate genotypes which have high, stable performance for Fe content.

Improving nutrition with African indigenous vegetables in Kenya and Zambia 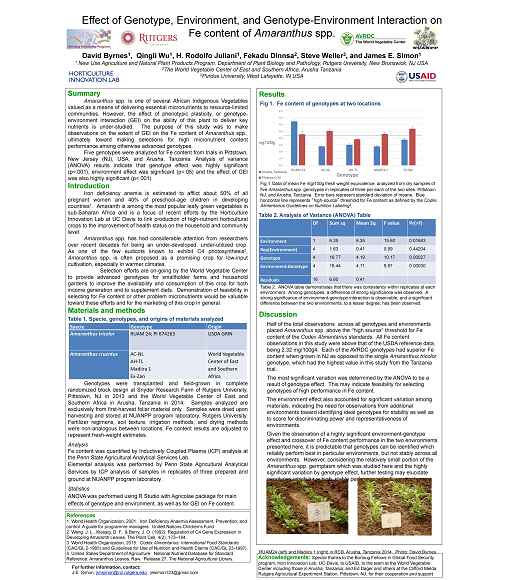